BOOM! Salem After WWII: Announcing a new feature exhibit at the Salem Museum 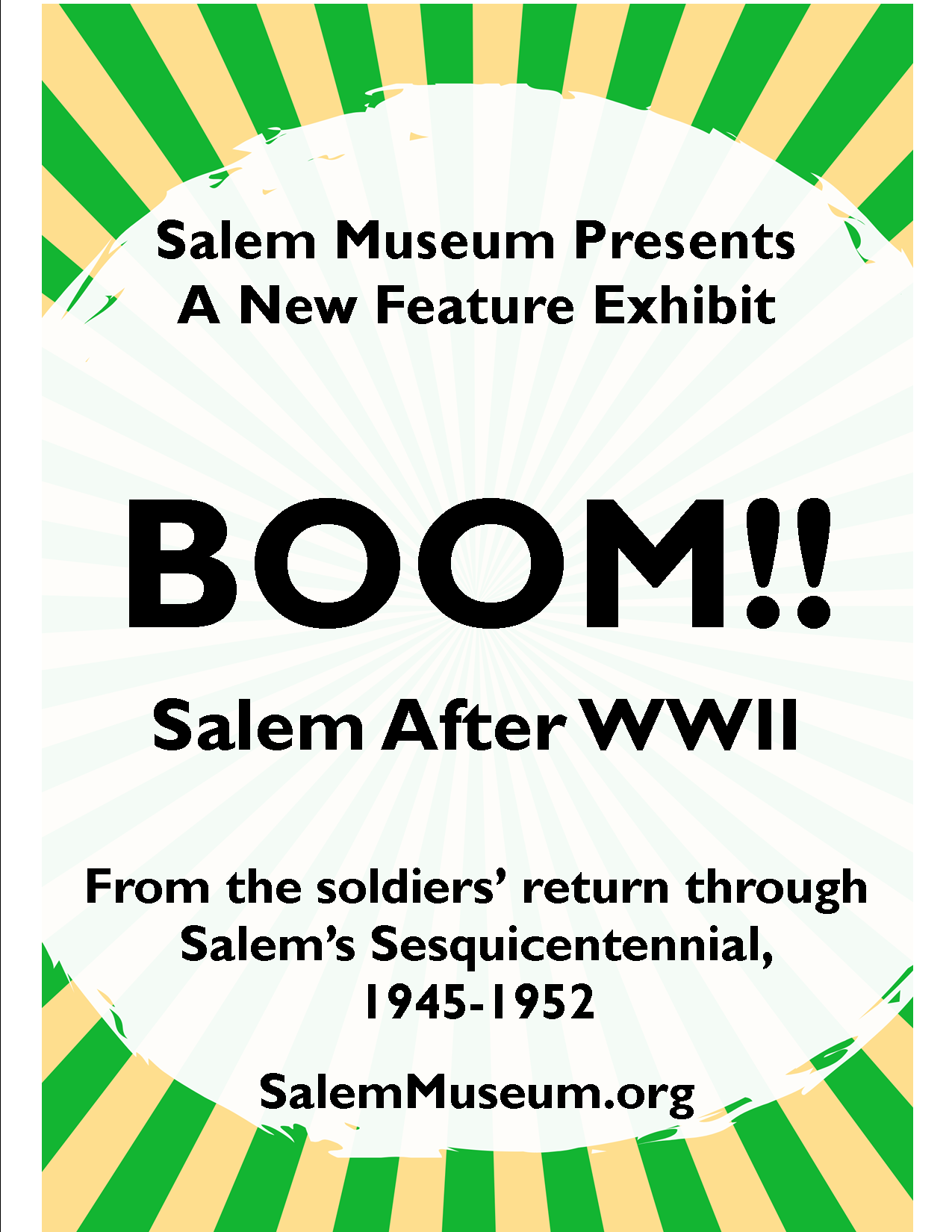 Announcing a new feature exhibit at the Salem Museum

The year 2020 marked the 75th Anniversary of the end of World War Two, an outcome that powerfully changed American life. To explore what happened locally after the soldiers came home, the Salem Museum announces a new feature exhibit, BOOM! Salem After WWII, that celebrates the boom times that Salem and the United States experienced from 1945 through 1952.

In Salem, the period started and ended with a BOOM—parades, programs, and community-wide celebrations! When victory was announced in 1945, all of Salem erupted with joy. Impromptu parades took place along Main Street, culminating in celebratory programs held at Municipal Field. A similar set of events, planned in advance this time, took place in 1952 when Salem celebrated its 150th anniversary. The whole town turned out for parades, historical performances featuring a cast of 500, and other activities that lasted for a week.

In between, Salem experienced a baby boom and a surge in students, growing demand for suburban housing, and a wide range of consumer goods available once more. New businesses opened and expanded up and down Main Street and all through the town. Some are still in operation, such as Medeco, Graham-White Manufacturing Company, and Maid Bess Garment Company (now Integrated Textile Solutions). Others now gone, but well remembered, included Tarpley’s, Valleydale, and the Lee-Hi Drive-in. Existing schools saw expansions, and two new schools—West Salem and South Salem Elementary Schools—were soon built.

“This time period is when modern Salem begins to take shape,” said Alex Burke, the Salem Museum’s assistant director and exhibit designer. “It’s interesting to look back and see how this time period leads into the Salem we know today.”

BOOM! Salem After WWII was made possible through the support of the William and Margaret Robertson Endowment.

About the Salem Museum & Historical Society

The Salem Museum & Historical Society is an independent, nonprofit organization preserving and celebrating the history of Salem, Virginia, which was founded in 1802. The Salem Museum is located next to Longwood Park in the historic 1845 Williams-Brown House at 801 East Main Street, Salem, VA 24153. Open Tuesday–Saturday, 10 am to 4 pm. Museum admission is free, but donations are appreciated. The Museum has free parking. 540-389-6760. salemmuseum.org

Warning: mktime() expects parameter 1 to be int, string given in /home/customer/www/s-rcchamber.org/public_html/wp-content/plugins/widget-countdown/includes/widget.php on line 350